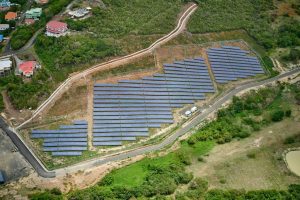 The utility-scale renewable energy project, the first of its kind in St. Lucia, was made possible through technical assistance from the Rocky Mountain Institute (RMI) which has received financial support from the United Nations Development Programme, the Global Environment Facility, and the Norwegian Agency for Development Cooperation.

“Today I applaud those who made this solar park into a reality – LUCELEC and the government – by working together are setting an example for other islands. Collaborating to solve your countries energy future is what we all should be doing,” said  Figueres.

“This solar farm is a major first step for St Lucia, and we can already see that it is paving the way for more renewable energy projects in the years to come,” said Clinton.

“The best way to reduce the risk of catastrophic power failures on an island during a storm is to ensure that all energy isn’t coming from one location. Projects like this solar farm help create a more resilient, more sustainable power grid while also lowering the cost of energy.”

“I know that this renewable energy project will be a great success and it represents a new promise and a new model that I hope to see replicated in the future,” said Prime Minister Allen Chastanet.

“We remain very optimistic about the future of the development of the electricity sector and as a Government we are committed to projects such as these which are the key to facing the climate challenge that small islands like ours face. I congratulate LUCELEC on spearheading this project and we continue to be thankful for the support of the Rocky Mountain Institute and all who were involved in its successful implementation.”

The solar farm builds on the work LUCELEC has been doing with grid-tied rooftop solar photovoltaic (PV) systems since 2009.

It is expected to provide the impetus for more renewable energy initiatives and change St. Lucia’s energy landscape:

The solar farm meets about five per cent of St. Lucia’s peak electricity demand and will reduce the volume of fuel purchased by LUCELEC by about 300 thousand imperial gallons per year. LUCELEC uses approximately 20 million imperial gallons of fuel per year.

The solar farm is the product of collaborative international cooperation from the business, government, and nonprofit sectors:

GRUPOTEC, an international firm with extensive, worldwide experience in developing solar plants undertook the engineering, procurement, and construction of the solar farm.